First clean the pumpkin, cut it into small cubes and put it in a non-stick pan with the butter, then cover with a lid and cook for about 20 minutes over medium-low heat (adding very little water if it tends to stick too much).
Then blend finely. 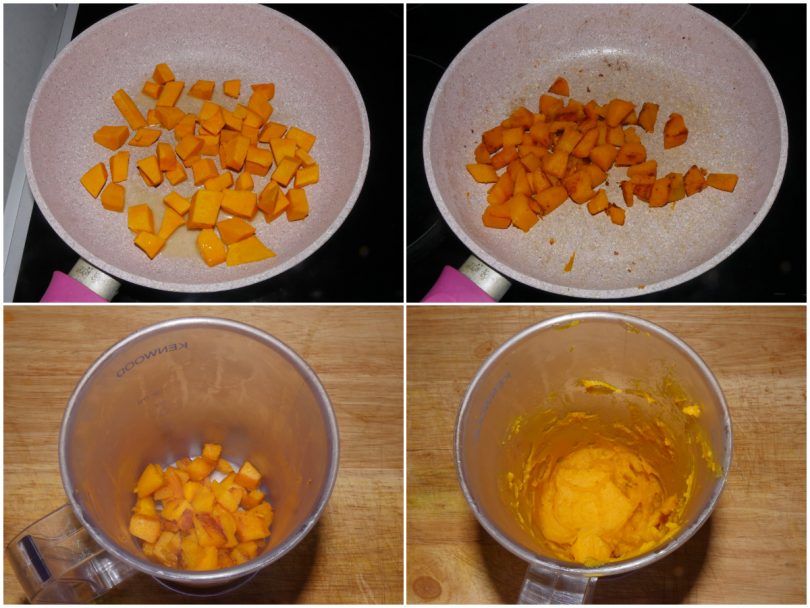 Add sugar and spices and mix. 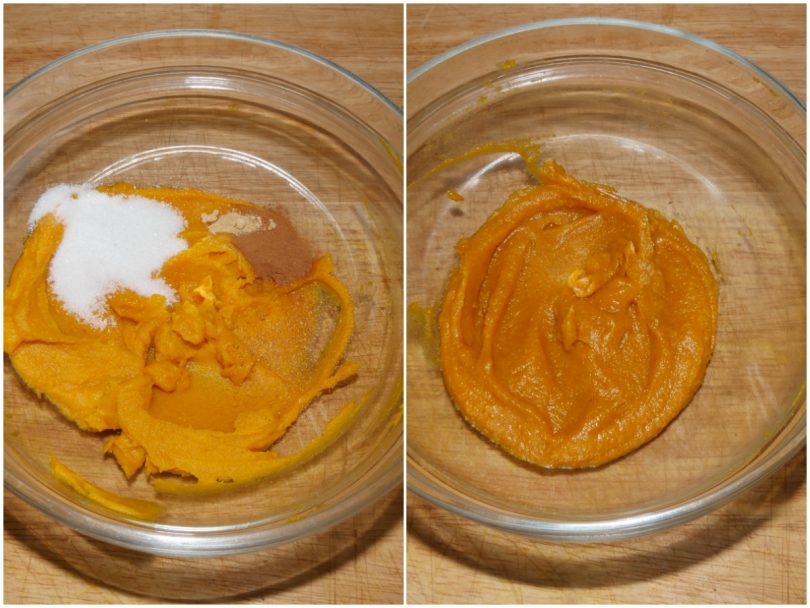 Prepare the coffee.
Separately, heat the milk in a saucepan adding 4 tablespoons of pumpkin puree; mix well, then add the coffee too. 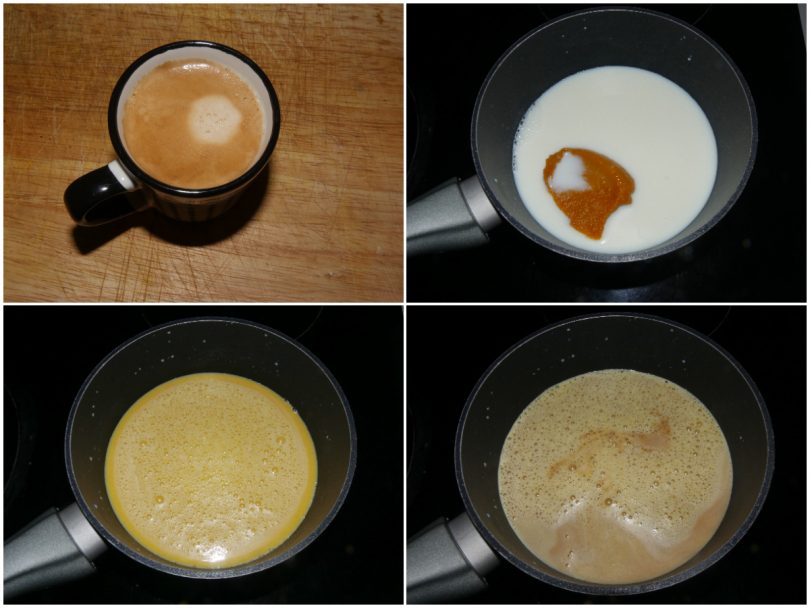 Finished: decorate with some whipped cream and cinnamon and your Pumpkin spice latte will be ready to be enjoyed! 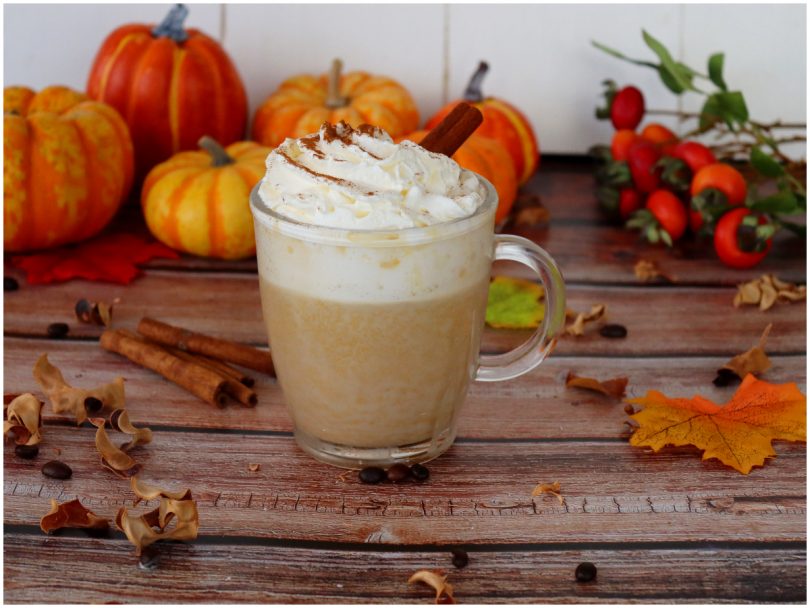 The ideal spice to use in the kitchen, with a different taste to be savored, cardamom (Elettaria cardamomum) we can define it fresh, sweet and a little pungent. Belonging to the Zingiberaceae family, the same as turmeric and ginger, its plant resembles a lily, but it can reach three to four meters in height.

Of Indian origin, precisely in the country of Malabar is among the ingredients of curry, while in the East, where it is very common, it is added to coffee. In Italy, however, it is still not very widespread.

It comes in the form of tiny seeds contained in capsules and of different colors: after harvesting they are dried in the sun and then they can be used as they are or reduced to powder, even if the flavor is better preserved in the first case. Among the varieties, the Ceylon cardamom, typical of Sri Lanka, deriving from the plant, is used in the kitchen Elettaria repens, which is also called green cardamom, whose scent is more pronounced. Then there is that Brown which tends towards smoked and that black with an extremely delicate flavor. There is also the white type which are actually artificially lightened greens. After harvesting, they are dried with a laborious process to prevent them from opening. Preserved in this way, they keep their scent much longer. There is also powdered cardamom on the market, obtained by grinding seeds and shells which, however, is much less aromatic. As a reminder, to recover the seeds, to be crushed before use, just open the capsule by applying light pressure with your fingers.

Cardamom has aphrodisiac properties: already in 800 this particular quality had been discovered, moreover it seems that the seeds helped to conquer a person if hidden in an infusion or in a drink. In short, a kind of Cupid. Furthermore, in the ancient Egypt it seems that the seeds were useful for whitening teeth and that some sources have ascertained that it was also used during the phases of embalming as anti-putrefactive. Ah, in India it is a sacred good, because it is considered one communication tool to get in touch with the gods.

But did you know that it was also used to prepare lotions against sore throat? Also, not containing gluten it is ideal for celiacs who will be happy to use it.

Because it is easier to find and less expensive, the black cardamom it is often used instead of the more precious green cardamom, even if the two varieties have decidedly different aromas (the green one is less bitter and more intense). For its slightly smoky flavor, due to the fire drying process of the pods containing the seeds, black cardamom is not particularly suitable for overly delicate dishes or sweet preparations (for which it is preferable to use the green variety). If you want, you can also add when cooking rice or soups the whole pods, squeezing them slightly but being careful not to let the seeds come out, and then remove them when serving the dish (in this case the cardamom flavor will be more intense). Two or three seeds of cardamom in the cooking water of legumes it helps to make them more digestible and counteracts side effects such as abdominal bloating. Cardamom seeds are also one of the ingredients of garam masala, a mixture of spices widely used in Indian and Pakistani cuisine to flavor rice, while in Arab countries black cardamom, like the green one, is used as a flavoring for tea and coffee. In general, it is better to buy black cardamom in pods because in this way the seeds retain their aroma longer.

This strong-flavored spice has a flavor slightly peppery, with a hint of eucalyptus and lemon, which leaves a feeling of warmth in the mouth without being spicy. Let's say it has a slight minty aftertaste. Its pungent flavor also enhances both fish, meat and vegetables, which is why it must be used sparingly.

In addition to satisfying the palate, it is good for the body in general. Indeed facilitates digestion and helps the intestine when it is irritated. But not only that: it can be used to do infusions against colds and to tone the body. It can also be used as essential oil in the form of massages diluted in a neutral oil.

Cardamom and its recipes

The use of cardamom in the preparation of desserts it is a widespread custom especially in the cuisine of Northern European countries, which also use it for the preparation of liqueurs, including the famous glögg, a typical alcoholic of Sweden. In fact, it goes well with sweet and sour cuisine and with desserts and chocolate creams and mousses.or vanilla, and is a classic ingredient in pain d'épice. The Arabs instead use it to prepare the qahwa, Arab coffee, traditionally considered a tonic and purifier of the blood. This drink is obtained by dosing coffee and cardamom seeds in variable quantities depending on the desired result.

Do you want to experiment in the kitchen by trying your hand at which cardamom-flavored dessert? Try LA CRÈME CARAMEL WITH CARDAMOM, the cardamom and coffee garland, crunchy coffee millefeuille with cardamom scent and – why not – finish in style with cocoa and cardamom coffee with whipped eggnog

To prepare the cheese spread with spices, reduce in a saucepan 40 g of fresh cream with 2 sachets of saffron for a couple of minutes, until the volume has halved; season with salt, leave to cool, then mix 200 g of goat cheese, ricotta or robiola.
spread the cream obtained on 4 slices of hot bread, completed with a minced pepper and decorated with buds or edible flowers.