Few people know that Chinese fortune cookies, famous all over the world but widespread especially in the United States, are actually of Japanese origin

Fortune cookies are crispy biscuits in the shape of a folded crescent, which have hidden inside a paper note, also called "luck", which contains a motto, advice or prophecy. Known globally, present in Chinese restaurants in different countries of the world, but prevalent in the United States, Chinese fortune cookies actually have very little Chinese. Little known is, in fact, their fascinating history reconstructed in recent times, and especially theirs Japanese origins. Let's then find out how this Japanese recipe spread in California, and then to all intents and purposes became an invention and an American commercial product.

The famous "chop suey”Is an American Chinese-style dish consisting of small pieces of meat, bean sprouts, eggs, various vegetables, all seasoned with a thick gravy. Well, just like this exotic dish popular in many Chinese restaurants, even fortune cookies do not have Chinese origin. The merit of the discovery that these biscuits were probably invented in Japan and that from there they then came to the United States goes to a Japanese history and folklore student who for six years retraced its history, and whose work appeared in several publications . Nakamachi identified in fact in Kyoto, near one of Japan's most famous Shinto shrines, several bakeries that prepared very similar biscuits, in form and characteristics. While the fortune cookies spread in America and in the West in general are white, they are made with vanilla, sugar, butter and flour and have the luck hidden inside them, the Japanese ones they are called tsujiura senbei, they are a bit larger, brown, are based on miso and sesame and, although their shape is identical, the sheet of paper is stuck in the curve, so as to be visible (the bakers fear that it may be accidentally ingested). While the fortunes of the most famous oven, Hogyokudo, are more poetic than prophetic and have always been the same for decades, those of the other ovens near the sanctuary give advice or make predictions. Finally, it must be said that i Japanese fortune cookies they actually seem to have even more ancient origins and that, like any other biscuit, it is generally served with tea.

From Japan to California to Chinese restaurants

Japanese fortune cookies made their first appearance in the United States in the early 1900s. Many Japanese or Chinese immigrant families claim to have invented or spread fortune cookies. Originally these biscuits were a specialty of the California, since in those years many immigrants owned Chinese restaurants or chop suey restaurants, but they quickly spread throughout the country. American fortune cookies had a different recipe and were initially made using chopsticks and the main producers were Chinese immigrants. As for the luck contained within the biscuits, there has been a real evolution over time. While in the first biscuits there were mostly famous aphorisms or biblical sayings, over time these were replaced by funny phrases, numbers that were recommended to play and even smilies and, subsequently, by advice and predictions.

In the late 1950s, around 250 million fortune cookies were made each year by dozens of small Chinese bakeries and fortune cookie companies. Production increased, however, considerably after 1964, or after Edward Louie of the Lotus Fortune Cookie Company in San Francisco invented a machine that folded the dough, thus managing to automate the process. In the 70s, instead, the Wonton Food Inc, or what would soon become the world's manufacturing company.

Currently, there are over 3 billion fortune cookies produced every year in the world and a considerable percentage of these are consumed in the United States. Just think that Wonton Food Inc alone produces over 4.5 million biscuits every day. Fortune cookies are still served in Chinese restaurants and Chinatowns in many countries around the world, including Italy, France, Great Britain and Mexico. In India fortune cookies taste similar to butter biscuits, while in Brazil a surprisingly high number of winning tickets from the Brazilian national lottery in 2004 reported numbers contained in fortune cookies distributed by a famous local chain of Chinese restaurants called Chinatown. Despite the worldwide spread of fortune cookies, these paradoxically they never caught on in China. In 1992 Wonton Food Inc tried to introduce fortune cookies to China, but it failed because the Chinese considered them too American.

The cuts of meat, the aromas, the cooking. Our Joëlle Néderlants guides us through one of the most invigorating recipes of the winter. And more convivial, for a Sunday lunch with friends

L'winter in our opinion? It can only be at the table, in the company of friends and relatives, with a rich, hot dish, to share. Boiled meat is one of those dishes, a typical recipe from northern Italy, the symbol of party and of family.

Preparing it requires care, but following some rules basic you can bring a real delicacy to the table. The aspects of fundamental importance for the success of the dish are: the cuts of meat to be used, the inevitable aromas and the cooking method.

Look at the tutorial in the gallery above for the complete recipe for mixed boiled meat, to be prepared step by step with our advice.

For a boiled meat for 4-6 people we used seven cuts: 600 g of hen, 600 g of veal brione, 500 g of tongue, 800 g of priest's hat, 400 g of beef white meat, 300 g of veal tail , 500 g of veal ossobuco. The meat must be cooked when the water boils, so it will retain juices and nutrients (instead to make a good broth we start from cold water). Serve the boiled meat with green sauce, horseradish, mustard and mustard.


First of all, melt the chocolate (in a bain-marie or in the microwave), add the cream and mix until a thick and homogeneous cream is obtained. 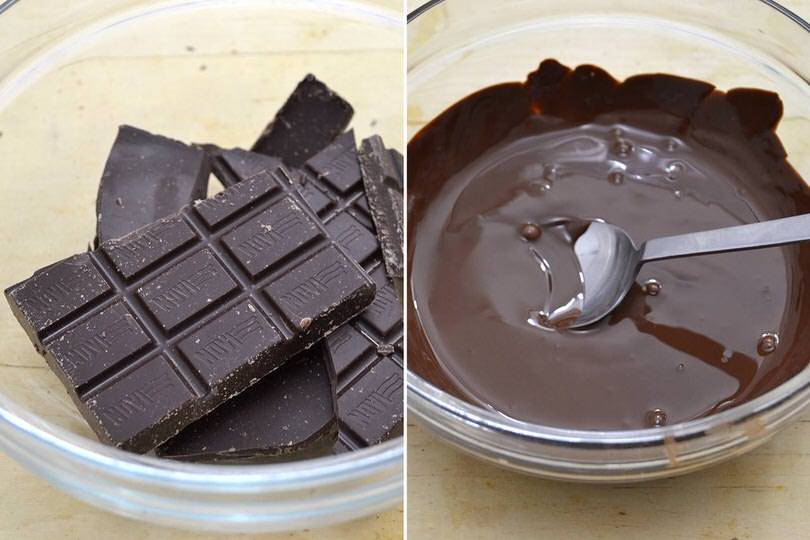 Then peel the mandarins, taking care to eliminate the white filaments and any seeds without damaging the wedges. 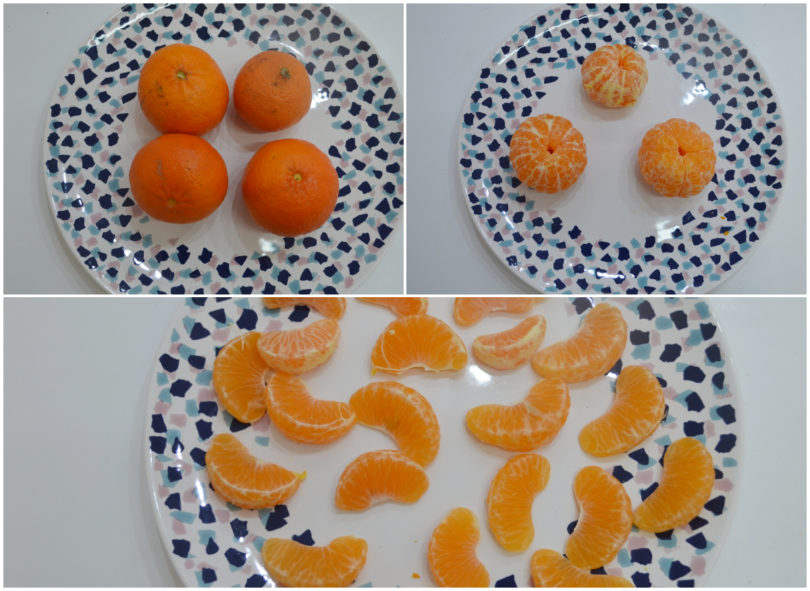 Dip each slice in the chocolate (now lukewarm) for half, then pass it in the chopped hazelnuts.
As they are ready, place the wedges on a clean surface so that the chocolate dries: to speed up the times, you can move them for 15-30 minutes in the fridge. 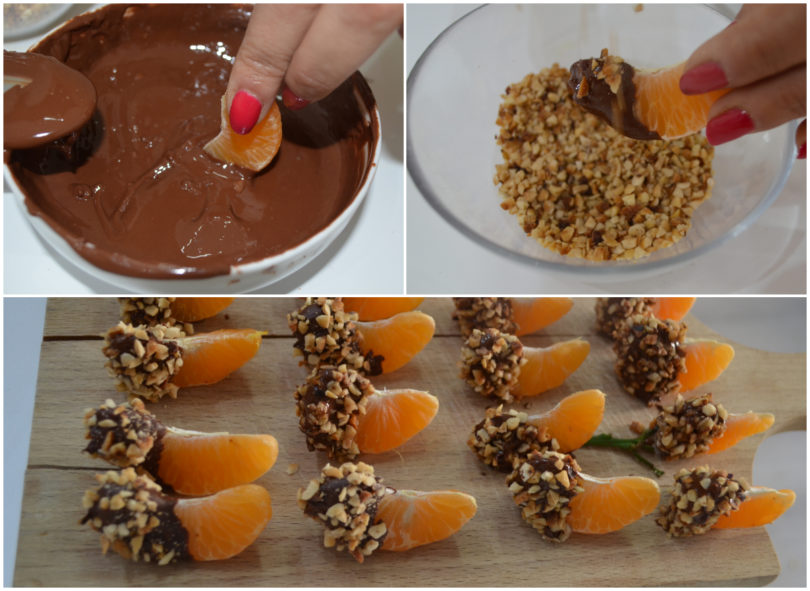 The chocolate mandarins are ready, serve them immediately. 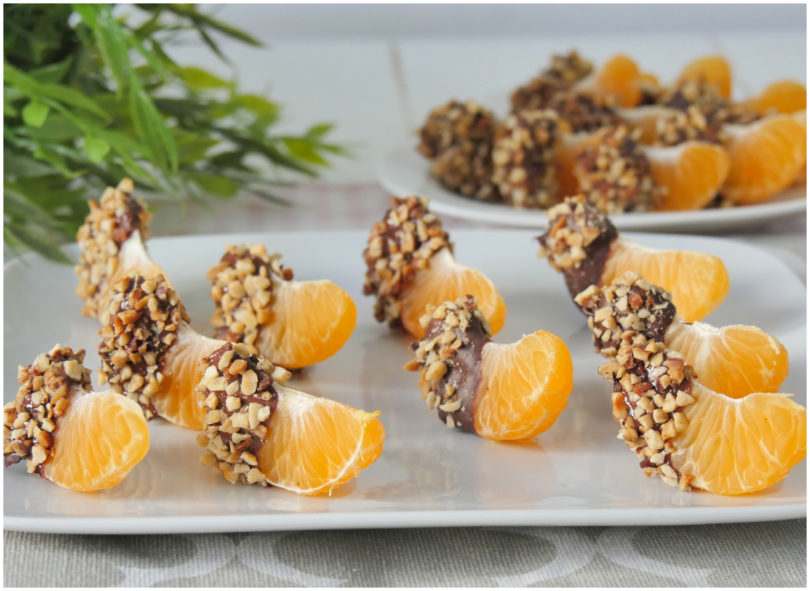