The origin of many dishes of our tradition is lost in the mists of time, but in the case of dumplings a precise historical reference has come down to us. The testimony comes from the cycle of Romanesque frescoes which cover the inside of the chapel of the castle of Appiano, majestic fortress on the Wine route, about ten kilometers from Bolzano.
The chapel, consecrated in 1131, is tiny, but for its paintings, discovered in the 1920s and brought to light only in the 1960s, it is considered among the most important artistic jewels in the region. In one of the scenes of the cycle of frescoes, the Nativity, the Madonna is turned towards a woman intent on cooking, a "profane" detail that provides an irrefutable clue: five large dumplings sprout from the pan on the fire, while the Knödelesserin (the "eater of canederli ”) tastes another, bringing it to the mouth with a long spoon.
The painting, therefore, anticipates the alleged three centuries birth of dumplings which, according to a widespread legend, would have been created there by a peasant to satisfy the ferocious Lansquenets (mercenaries in the service of the emperor of Austria since 1493) who otherwise threatened to set the farm on fire. 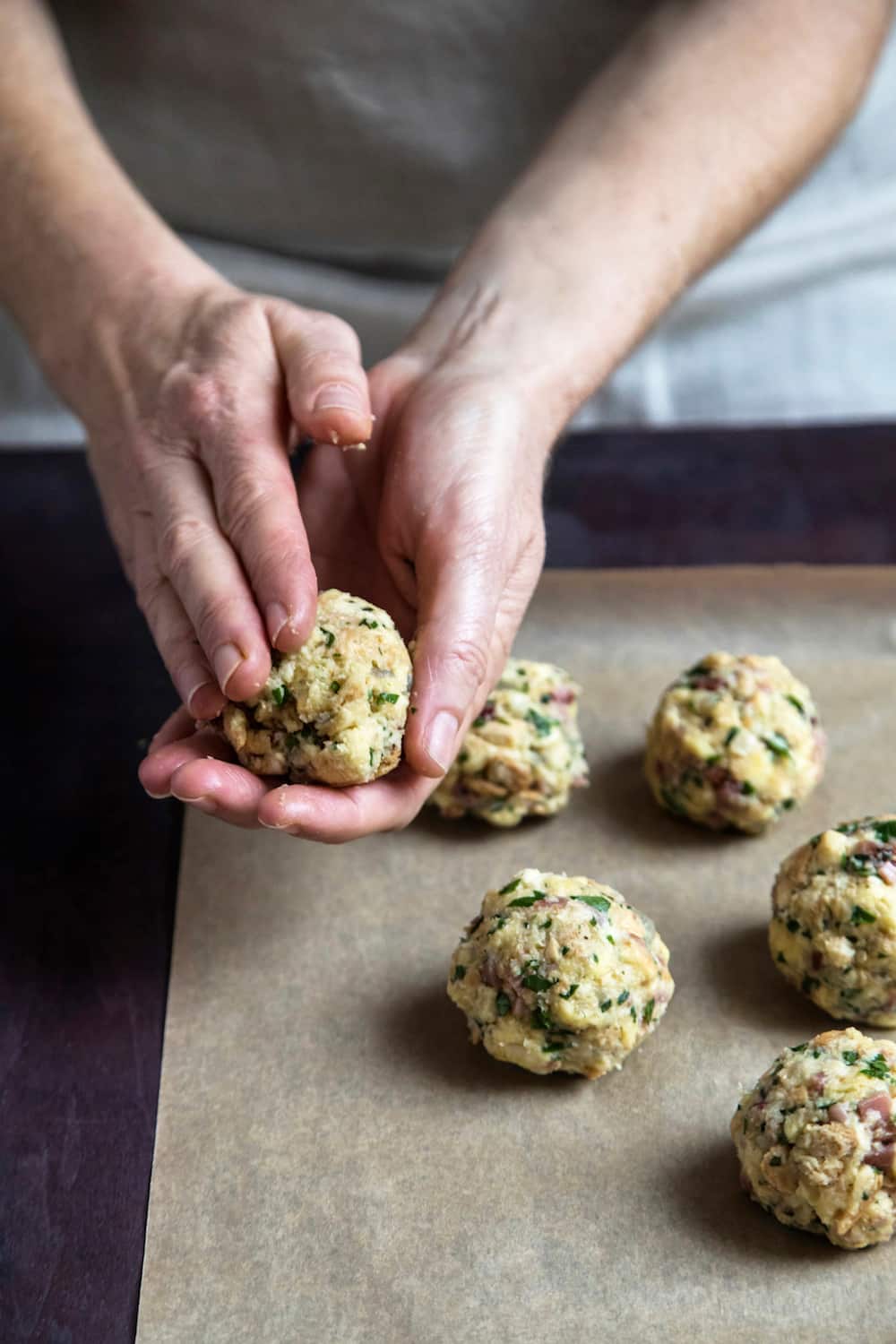 The ancient art of recycling
Date of birth aside, it is certain that after centuries the dumplings are still the identity dish of South Tyrol, also widespread in the Ladin valleys around the Dolomites with the eloquent term "balotesPallottes similar to a large round dumpling made from stale bread, a once sacred ingredient that was never wasted. Wise country cooking necessitated virtue and used it by kneading it with what was available between the vegetable garden and the stable of the farm : vegetables, aromas, cured meats, milk, cheeses; sometimes apricots or other fruits to make it a dessert. The variations of the dough, therefore, are innumerable, with some versions becoming "classic": spinach, chard or beetroot, cheese or liver and kidney dumplings (some local butchers sell them already ground together). Then there is one official recipe, filed in 2003 by the Italian Academy of Cuisine, which plans to enrich the bread with speck, eggs and milk. Tasty and hearty dishes that, if once were necessary for Alpine populations to cope with the cold and heavy work in the mountains, today are a tasty invigorating for refresh the skiers after the descents along the snowy slopes that in this season whiten all of South Tyrol.

The right wine
The dumplings have a natural vocation for matching with wine, by virtue of their soft consistency and the savory smoking of the filling. We face them with a Pinot Grigio, specialty spread between the provinces of Trento and Bolzano and made respecting the generous personality that goes towards food without contrasts and forcing.

Word of chef
The chef since 1985 Herbert Hintner he is the chef patron of the Zur Rose restaurant, in a suggestive 12th-century building in Appiano, to which 10 years later Michelin assigns the star. He says that preserving traditional cuisine is a social responsibility: he carries it forward with commitment and passion, with scrupulous research of the best raw materials supplied directly by local producers. And he often stated that the dumplings he did his mom they are unmatched.
How were they made?
The dough was the classic one with white bread, speck and parsley. Unlike the others, however, they were about half as small. He made them with a spoon and did not overcook them, so they were compact. But the memory is mainly linked to the emotions experienced in the family.
And how does the chef cook them?
About 25 years ago, on the occasion of an assembly of hoteliers from South Tyrol, I created the gray cheese dumpling soufflé on spinach cream. The result was good and now it is a classic that other restaurateurs also prepare.
In addition to these?
Depending on the season, ricotta, liver, fresh herb or cheese dumplings.

Gourmand addresses to taste the dumplings
Turm, allo Sciliar (Bz)
Elegant restaurant inside the Romantik Hotel, where the owner and chef Stephan Pramstrahler offers revisited Tyrolean cuisine: tortelli stuffed with roe deer, liver dumplings, beef cheek braised in Lagrein. For dessert, plum dumplings.
Oberraut locality Ameto, Brunico (Bz)
Trattoria where you can dine in the typical Stuben. After the home-made cold cuts, you can taste crushed dumplings of gray cheese or ravioli filled with game. Among the latter, beef goulash with speck dumplings.
Fichtenhof Salorno (Bz)
Immersed in a natural park, it is an inn obtained from an ancient farm that offers typical dishes with raw materials from the area: carne salada for appetizer, bacon or liver dumplings in broth, venison goulash. Among the homemade desserts, apple, apricot or plum strudel.
Jora Monte Baranci, San Candido (Bz)
Trattoria-farm that is located along the ski slope, reachable on foot from the chair lift in 20 minutes. In addition to the liver dumplings or speck, try the tagliolini with charcoal and gray cheese. Among the latter, veal offal with potato dumplings with cheese. For dessert, strudel or apple fritters.

This recipe has already been read 20 times!